About NEAD & the Symptoms

What is non-epileptic disorder?

When people have non-epileptic attacks they experience sudden changes in their perceptions (the things they see, hear, and feel) and in their ability to control their body. Other people may notice changes in behaviour or the ways the person acts. This might look like: 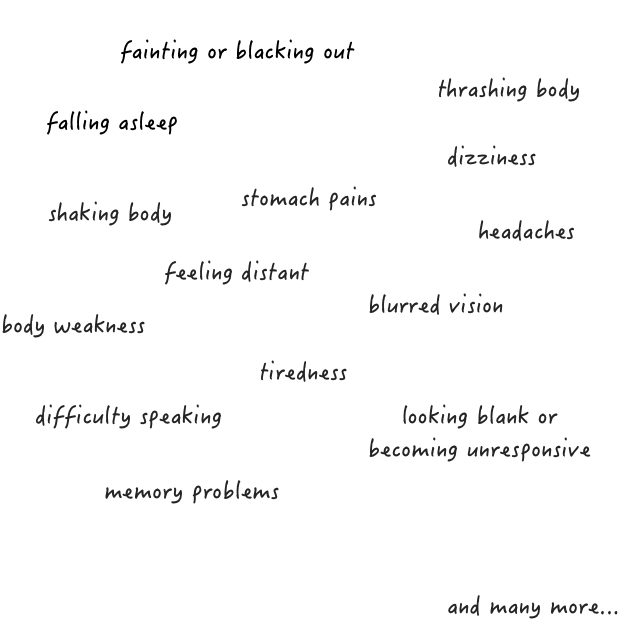 How are they different from epileptic seizures?

Non-epileptic attacks may look like epileptic seizures but there are important differences.

Why do they happen?

Non-epileptic attacks are the brain’s response to potentially threatening triggers inside or outside the body. Inside triggers include thoughts, memories, emotions or sensations. Outside triggers include difficult situations but also objects, scenes, sounds or smells which remind the brain of a difficult moment in the past. Sometimes this happens when people feel stressed. However, they can also happen to people who feel calm and relaxed. In most cases people do not know why they have them.

Some young people and their family find it difficult to believe that something as frightening as a non-epileptic attack is not caused by a process that would show up on a brain scan. However, it is well known that emotions can produce physical reactions in the body. For example, everyone has blushed in embarrassment or felt their heart thump in their chest before an exam. Non-epileptic attack disorder may be a way of your body telling you that something is too stressful or difficult to manage.

Some children have both epileptic and non-epileptic seizures. Your medical doctor will have told you which type you have.

Why am I having them?

There is no single cause of NEAD. You may have read or been told that non-epileptic attacks are caused by an upsetting experience in the past. However, many young people with NEAD have not experienced any major trauma before developing the symptoms. Sometimes NEAD occurs when young people are struggling to cope with their own or other people’s expectations, or when they face difficult choices.

Studies have shown school worry/stress to be the biggest cause for non-epileptic attack disorder in children. However there are other factors that can sometimes be related. These may include: bullying; rejection; family disruptions; conflicts; loss of a family member or friend; significant injury/hospitalisation.

Sometimes the attacks seem to help people deal with their emotions and stress that are otherwise difficult to handle.

Often children only have non-epileptic attacks in one place (e.g. school). This can make looking for triggers easier and help to find ways to manage or stop them happening.

Do other people have non-epileptic attacks?

Can they get better?

Non-epileptic attacks often get a lot better when the diagnosis has been explained, and when young people and their families have had a chance to think about what might have caused the attacks. However, some young people may need extra help to get better.

What is the treatment?

Non-epileptic attacks are something that the brain has learned to do – a bit like sticking your arms out to stop you from falling on your face when you have tripped up. There are no tablets to stop non-epileptic attacks. However, you can learn to spot situations which are likely to cause the attacks. You can also learn to spot the first symptoms of a non-epileptic attack giving you more time to stop the attack from happening. Some people can learn to control their attacks by changing their breathing or by concentrating on something outside their body. People can also improve by addressing some of the causes of stress in their lives.

It is important to remember that psychological treatment is not a quick-fix and can take time to work. Just like physiotherapy, psychotherapy often involves practicing things – starting with something that is easy and aiming for things which are more difficult. Most children who receive psychological treatment for NEAD report improvements of their attacks and their quality of life.

Learn more about getting help >